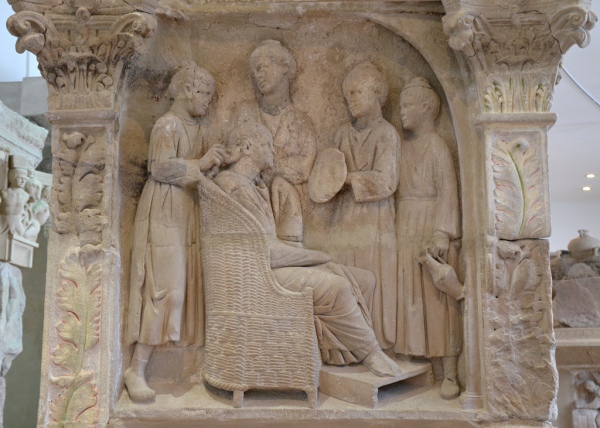 In Latin, an ornatrix was a female slave who beautified and adorned their owners, working to create elaborate hairstyles, arranging clothing, jewelry, cosmetics, and perfumes; anything to embellish their owners.

Greek art and literature similarly emphasizes the fact that if a woman is to look her best, she needs assistance, whether that be peers, slaves, or even Eros.

In other words, it takes help for a woman to be fully adorned and dressed. And here at the Ornatrix, that is what I’m going to do to help re-dress the past.

Why does antiquity need re-dressing? It is true that study of dress has never been as active as it has in the past two decades. No longer is Larissa Bonfante alone in discussing Etruscan dress.

Conference panels and edited volumes, as well as important studies such as Mireille Lee’s Body, Dress, and Identity in Ancient Greece, Kelly Olsen’s work on Roman male and female dress are just a few of the most recent studies devoted to dress and social history. Interest in luxury goods is thriving and material studies in general are booming. And then there’s the Griffin Warrior….

All in all, it’s a good time to be thinking about ancient jewelry.

But there is a still a gap between these specific fields and general discussions of jewelry and costume. Jewelry is still an…accessory rather than an integral part of ancient material culture. In museums, jewelry often is housed separately from other artifacts so it can be hard to pair these luxury goods with other objects, much less to consider ornaments made of less valuable materials. And a full consideration of jewelry can help to make the real lives of people in the Mediterranean richer and more detailed.